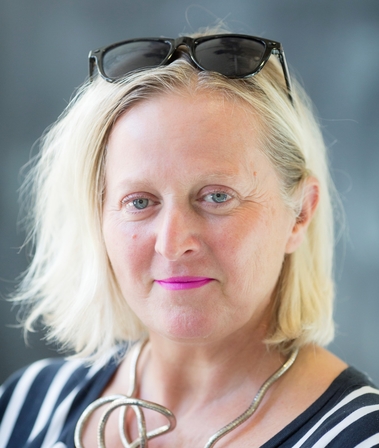 Jenny Sealey is the Artist-in-Residence for IF: Milton Keynes International Festival 2020

IF: Milton Keynes International Festival, which celebrates its 10th anniversary this year, has appointed Jenny Sealey MBE, Artistic Director and Chief Executive of Graeae, as its Artist-in-Residence for 2020.

Included in The Stage 100 2020 - the list of the 100 most influential people in British theatre - in recognition of her advocacy for disabled representation in the arts, Sealey will be advising on the biennial Festival's inclusion and engagement programme.

The 2020 Festival (17 to 26 July) will also be the first opportunity to see the work-in-progress - including a workshop and symposium - of a new opera directed by Sealey working with Graeae.

Commissioned by Festival producers The Stables, to mark the venue’s 50th anniversary, The Paradis Files tells the extraordinary story of the life and career of blind 18th century composer, Maria Theresia von Paradis. The music is written by Errollyn Wallen, with libretto by Nicola Werenowska and Selina Mills.

Jenny Sealey says: “I’m delighted to be joining the wonderful team at IF: Milton Keynes International Festival as Artist-in-Residence for 2020. I am excited to start working with the team and partners to ensure inclusion and diversity is at the heart of this summer’s Festival, both on and off stage. As a Deaf woman, directing the first opera for Graeae and The Stables for the Festival is typical of our boundary-pushing, and I am looking forward to the challenge of creating a production that is both relevant, accessible and has wide appeal.”

Monica Ferguson, CEO and Artistic Director of The Stables, and Festival Director, says: "Producing IF: Milton Keynes International Festival gives The Stables a platform to commission and collaborate with extraordinary artists. It is an opportunity for us to reach new audiences and for artists to develop and create work. After presenting Graeae’s previous work at the Festival and discovering a shared passion for opera with Jenny, I am truly excited that she has agreed to be Artist-in-Residence for 2020 and to present the first staging of The Paradis Files.”

Graeae is a force for change in world-class theatre - breaking down barriers, challenging preconceptions and boldly placing D/deaf and disabled artists centre stage. Championing accessibility and providing a platform for new generations of artists, Graeae leads the way in pioneering, trail-blazing theatre. Recent productions and co-productions include: One Under, Reasons to be Cheerful, Cosmic Scallies, The House Of Bernarda Alba, TheSolid Life Of Sugar Water, Blood Wedding, The Threepenny Opera, Belonging, Blastedand Bent. Spectacular outdoor productions include This Is Not For You,The Limbless Knight, PrometheusAwakes and The Iron Man. With Naked Productions, Graeae have co-produced radical reimaginings of classic texts for BBC Radio 4. Co-directed by Jenny Sealey and Polly Thomas, these have included Three Sisters Rewired, Amy Dorrit and Graeae’s Midwich Cuckoos. Graeae is a National Portfolio Organisation (NPO) of Arts Council England.

Find out more about Graeae: www.graeae.org

Jenny Sealey co-directed the London 2012 Paralympics Opening Ceremony alongside Bradley Hemmings (GDIF). She has been Artistic Director and CEO of Graeae since 1997 and has pioneered a new theatrical language, coining the term ‘Aesthetics of Access’; the creative integration of sign language and audio description within performance. Recent theatre credits for Graeae include: This Is Not For You, Reasons To Be Cheerful (2017 tour, 2012 tour and 2010 production), In Touch (co-directed, performed at the National Theatre), The House of Bernarda Alba (co-produced with Royal Exchange Theatre), Blood Wedding (co-produced with Dundee Rep Theatre and Derby Theatre), The Threepenny Opera (co-directed with Peter Rowe, co-produced with the New Wolsey Theatre Ipswich, Nottingham Playhouse, Birmingham Rep and West Yorkshire Playhouse), Limbless Knight (GDIF), Belonging (co-produced with Circo Crescer e Viver), Blasted, Whiter than Snow (co-produced with Birmingham Rep), Peeling and Bent. For Graeae and Naked Productions, she has co-directed with Polly Thomas radical reimagings of classic texts for BBC Radio 4, including Three Sisters Rewired, Amy Dorrit and Graeae’s Midwich Cuckoos. Additionally, Jenny has directed work, run workshops and given presentations internationally including Russia, Japan, India, Sri Lanka, Bangladesh and Brazil. In 2009, Jenny was awarded an MBE in the Queen's Honours and became the Artistic Advisor for the Unlimited 2012 Festival. Jenny has been awarded the Liberty Human Rights Arts Award, is an honorary Doctor of Drama at the Royal Conservatoire of Scotland and at Middlesex University and is a Fellow of the Central School of Speech and Drama and Rose Bruford College. In 2015, Jenny won the Outstanding Contribution Award at the Signature Deaf Awards.