Richard has performed tirelessly since his graduation from the Royal College of Music and his London debut in 1986. Playing around 70 concerts each year at home and abroad, he has written, arranged and discovered a lot of new guitar repertoire. Performing, composing, promoting music literacy and breaking down musical barriers has been his life’s work.

His gift for storytelling and  presentation is as apparent as his mastery of the guitar - and uniquely, for a leading recitalist, Richard plays standing up. 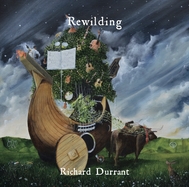 With a string of albums to his name, Richard released his latest recording Rewilding in 2020.

Inspired by the Knepp Wilding project in Sussex, this is an uplifting and optimistic album - a topical musical fantasy packed full of magical tracks led by Richard’s guitars, ukuleles and cello, complimented by four other musicians.

Join Richard in Sussex from your own home! This event will be broadcast on the Festival's website.

This event is free to view, though donations to the artist are encouraged via www.richarddurrant.com