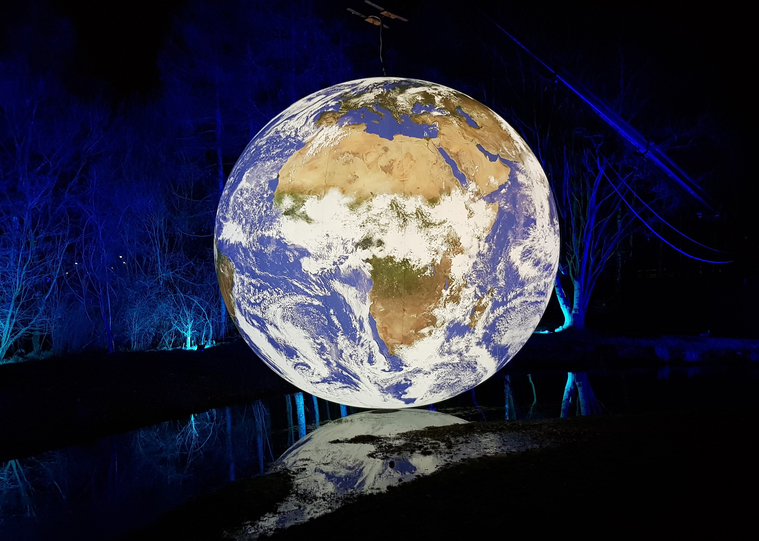 In Greek Mythology Gaia is the personification of the Earth. Created by UK artist Luke Jerram, Gaia is a stunning replica of our planet, measuring seven metres in diameter and featuring 120dpi detailed NASA imagery of the Earth’s surface.

The artwork provides the opportunity to see our planet on this scale, floating in three-dimensions. The artwork is 1.8 million times smaller than the real Earth with each centimetre of the internally lit sculpture describing 18km of the Earth’s surface.

The installation creates a sense of the 'Overview Effect', which was first described by author Frank White in 1987. Common features of the experience for astronauts are a feeling of awe for the planet, a profound understanding of the interconnection of all life, and a renewed sense of responsibility for taking care of the environment.

A specially made surround sound composition by BAFTA award-winning Composer Dan Jones is played alongside the sculpture.

Luke Jerram’s multidisciplinary practice involves the creation of sculptures, installations and live arts projects. Living in the UK but working internationally for 19 years, Jerram has created a number of extraordinary art projects which have excited and inspired people around the globe. Jerram has a set of different narratives that make up his practice which are developing in parallel with one another. He is known worldwide for his large scale public artworks.

The Open University is the Festival’s Knowledge Partner and has been working with schools across Milton Keynes to participate in workshops inspired by Gaia. A series of films and discussions have also been created to accompany Gaia. These will be presented as part of the Festival with details to be announced.

Gaia has been created in partnership with the Natural Environment Research Council (NERC), Bluedot Festival and The UK Association for Science and Discovery Centres. With supporting partners Culture Liverpool and Liverpool Cathedral.