Stream and Listen to a Sound Trail: Soundscapes for the Sculptures of Campbell Park 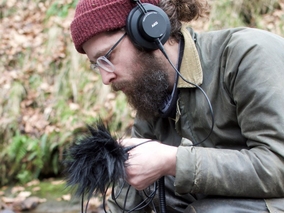 Sound artist Dan Davies has created a new soundscape trail for IF: 2021 that starts in Middleton Hall (location of Luke Jerram’s Gaia) and move through Campbell Park to the Tree Cathedral in Newlands (location for Luke Jerram’s Museum of the Moon) - taking in some 15 pieces of Milton Keynes' public art.

Hear the whole album, or listen to individual tracks - and read Dan's notes about the soundscape for each sculpture below. Dan's Bandcamp: dandavies.bandcamp.com

Use the interactive map at the end of this page to find the location of each sculpture.

Hear the complete album on Bandcamp - stream by pressing Play:

Stream and listen to each soundscape track individually here:

Middleton Hall, centre:mk / Soundscape: Window Seat by Dan Davies
A family share their memories of Middleton Hall, its significance to them as a young family and what it means now.

Sculpture: Chromocochere by David Batchelor / Soundscape: Sexagesimal by Dan Davies
The sounds heard in Sexagesimal are sourced exclusively from Chromocohere and the immediate surroundings. Using a device called an elektrosluch (Czech, meaning ‘electro-listen’), the electromagnetic field of Batchelor's work is recorded in audio. In reference to the clock-like nature of Chromocohere, the tempo of the piece is 60 beats per minute, the mathematical base for seconds and minutes.

Sculpture: The Object by Dhruva Mistry / Soundscape: The Sentinel by Dan Davies
All of the sounds heard in this piece are taken from The Object’s location, and from drumming directly on the artwork itself. Passersby, traffic and construction noise make up the ambient noise, looped into layered rhythms. Named for the short story by Arthur C. Clarke (which later inspired the screenplay for 2001: A Space Odyssey), The Sentinel imagines The Object as a mysterious monolith. With no discernible entrance or exit, the artist with tongue firmly in cheek, tries to communicate from the outside with whatever might be within.

Sculpture: The Milton Keynes Rose by Gordon Young / Soundscape: Spira Mirabilis by Dan Davies
Visiting The Milton Keynes Rose on a rainy morning in half term, the artist found families using the space to play a game of their own making. A kind of hide and seek, but with the names of the days marked on the pillars. This soundscape is the response to the enjoyment of this artwork, simple, fun and playful. The notes of the saxophones spiral inwards and outwards in key, sometimes intersecting, like the lines of the spira mirabilis (logarithmic spirals) of the sculpture.

Sculpture: Light Pyramid by Liliane Lijn / Soundscape: Beacon by Dan Davies
Beacon imagines Light Pyramid as a hybrid, part light beacon, part radio beacon, raising an alarm from the apex of the hill, like signal fires have done historically. Cello, piano and organ stand in for parts of the landscape below, as seen from Light Pyramid.

Sculpture: The Cave by Heather and Ivan Morison / Soundscape: Gimme Shelter by Dan Davies
The concept for The Cave’s soundscape came from a conversation with a Park’s Trust volunteer. They enthused about the public artworks in Campbell Park, calling them “artistic and culturally enhancing”. In their opinion this artwork had been co-opted by various groups, including young people, looking for a hideout from the elements (which would have been welcome on that particular drizzly day) or for gatherings. The soundscape imagines The Cave as a prehistoric, troglodyte-style shelter set to the kind of pulsing rhythms synonymous with youth culture - a Stone Age party. Body drumming, clapping, voice and manipulated field-recordings of stone are set to the pulse of the iconic 808 kick drum.

Sculpture: War Veteran by Ronald Rae / Soundscape: Guinea Pig Club by Dan Davies
Guinea Pig Club, like War Veteran, looks to the artist’s grandfather for subject matter. We hear the words of a young Spitfire pilot shot down over the Channel during WWII, who sees first-hand the “filth and stupidity that modern warfare means”. Ambient sounds from the site of War Veteran.

Sculpture: Animals in War by Ronald Rae / Soundscape: 470 Million Years by Dan Davies
In this soundscape Ronald Rae himself is heard speaking about the process of carving granite artworks such as Animals in War and what it means to do it by hand. All other sounds are derived from archive footage of Rae carving - chisel on stone, or taken from the site where the artwork is installed.

Sculpture: Chain Reaction by Ray Smith / Soundscape: Higher State of Entropy by Dan Davies
Chain reaction videos are now arguably a subgenre in their own right, with hundreds of millions of views online. Their origin can be found in films such as The Way Things Go (1987) by Peter Fischli and David Weiss, in which everyday objects like tyres, balloons, ladders and fireworks are arranged in order to create a chain reaction. In Higher State of Entropy a chain reaction is triggered and the listener is left to imagine what might physically be happening.

Sculpture: Gnomon (Shadow Caster) by Peter Bowker / Soundscape: Cysgod by Dan Davies
In Cysgod (Welsh for ‘shadow’) a cricket match at Campbell Park plays out alongside the sounds of a slate marimba, purpose built for this soundscape. A native Welsh speaker, hailing from the region of North Wales that provided the Ffestiniog slate for Gnomon, provides the samples of spoken word.

Map showing the Sound Trail
Each red marker below represents a sculpture. Click on a marker to find out more, and follow the route from Middleton Hall to the Tree Cathedral along the yellow line - listening to Truth, Beauty and Goodness as you go...